“To Damian Wayne, there is nothing more important than protecting the streets of Gotham City as Robin. But when he makes a critical mistake while out on patrol, Damian finds himself benched.

And what’s more, Damian’s dad, Bruce Wayne—a.k.a. Batman—decides that starting over at Gotham Metro Academy will be just the distraction Damian needs from his superhero routine. It is there he meets Howard—the smartest and most athletic kid in school. The boys’ rivalry is instantaneous and fierce…and both are sure only one of them can be the best in their class…”

“Batman and Robin and Howard” is a delightful release from DC Comics. Jeffrey Brown (“Jedi Academy,” “Space-Time”) has done a heroic job of creating a fresh scenario with lots of humour and heart. Batman doesn’t have a huge role in this story (when he does show up he is hilarious!) and that is fine because Robin and Howard are delightful show-stealers!

Brown has created a story which is going to be a great addition to any bookshelf or school library. It teaches some valuable lessons about teamwork, humility and the importance of friendship. Being the new kid in school is a daunting experience and this charming tale is going to help those going through the same ordeal and it will also entertain anyone who picks it up.

The artwork combined with the Brown’s writing is a winning partnership, much like Robin and Howard! There are some fantastic references throughout the book and jokes that will get young (and not so young!) readers laughing. I hope in the future we get to see Brown take on some more of DC’s characters.

Recently Jeffrey was a special guest on The Podcast Of Steel and I had a great time talking with him about the book and his career. 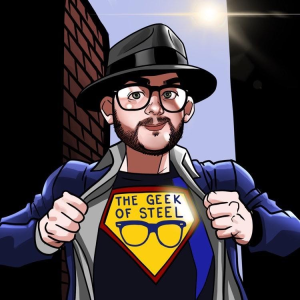 The Podcast of Steel 68 — News, reviews and interviews!

The Podcast of Steel: Episode 67 — How telephone boxes are saving lives

Podcast of Steel: Episode 66 — A visit to Park Row, a Batman inspired restaurant

Film, TV and stage actress Annette O’Toole began her journey towards a career in entertainment at

Kayla Wallace was born to perform and entertain. She grew up dancing and that remained her

A lot transpired in the latest episode of “Good Trouble” on July 21, 2021. The words

In the days following the death of George Floyd at the hands of Minneapolis Police officer,